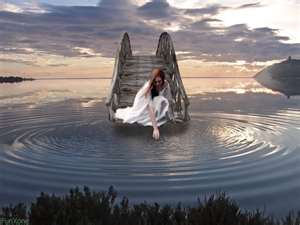 It was just a life – full of forgotten possibilities!

Rewritten for the Hopeless Romantic and designed to suspend all disbelief…

A kind of script she was too eager to accept without studying it too closely;

Lots of familiar Players commanding the stage in their clever and elaborate disguises;

They were a welcome distraction to an otherwise empty, lonely space.
Always standing face forward, always mesmerized by the bright lights;

Never focused on the cast beside her, behind her, below her??

Unaware of the growing shadows lingering at the left and the right.

Silence — another kind of answer- one that doesn’t require too much elaboration.

And while the foolish playwright scribbles recklessly on,

She holds her breath

And once the Hand reaches into a murky puddle

The Water can never be the same twice;

For there are 3 things in the world which cannot long remain hidden: